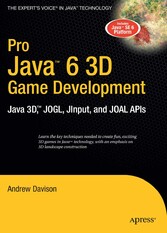 This book looks at the two most popular ways of using Java SE 6 to write 3D games on PCs: Java 3D (a high-level scene graph API) and JOGL (a Java layer over OpenGL). Written by Java gaming expert, Andrew Davison, this book uses the new Java (SE) 6 platform and its features including splash screens, scripting, and the desktop tray interface. This book is also unique in that it covers Java game development using the Java 3D API and Java for OpenGL--both critical components and libraries for Java-based 3D game application development


Andrew Davison received his Ph.D. from Imperial College in London in 1989. He was a lecturer at the University of Melbourne for six years before moving to Prince of Songkla University in Thailand in 1996. He has also taught in Bangkok, Khon Kaen, and Hanoi. His research interests include scripting languages, logic programming, visualization, and teaching methodologies. This latter topic led to an interest in teaching games programming in 1999. His O'Reilly book, iKiller Game Programming in Java/i, was published in 2005.