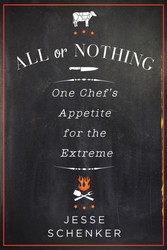 All or Nothing - One Chef's Appetite for the Extreme

All or Nothing - One Chef's Appetite for the Extreme

Blending Kitchen Confidential, Blood, Bones Butter, and Breaking Bad, a culinary memoir that illuminates the highs and lows of addiction, anxiety, and ambition in the world of haute cuisine.Thirty-one-year-old Jesse Schenker has rocketed to the top of the culinary world. An Iron Chef winner and James Beard nominee, he was voted Best New Chef by New York Magazine, and his acclaimed Recette was named Best New Restaurant by the New York Times. But Jesses epic rise masks a little-known past filled with demons and obsession, genius and mania.Growing up in wealthy suburban Florida, Jesse was introduced to the culinary worldand the world of hard drugs. Becoming a high-school dropout addicted to heroin and crack, he was alienated from his family and wanted by the cops. By twenty-one, he had robbed, cheated, and lied to everyone in his lifeand had overdosed, been shot at and nearly beaten to death. His eventual arrest motivated him to get clean.Jesse learned to channel his obsessiveness and need to get ever higher into his career. But his growing success fueled his anxiety, leading to panic attacks and hypochondria. In this startling and down to earth memoir, Jesse lays it all on the table for the first time, reflecting on his insatiable appetite for the extremewhich has led to his biggest triumphs and failuresand shares the shocking story of his turbulent life.