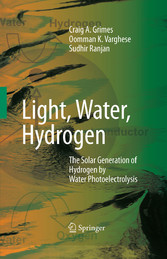 This book covers the field of solar production of hydrogen by water photo-splitting (photoelectrolysis) using semiconductor photoanodes. The emphasis of the discussion is on the use of nanotechnology in the field. The theories behind photocatalysis and photoelectrochemical processes responsible for hydrogen production are given in detail. This provides a state-of-the-art review of the semiconductor materials and methods used for improving the efficiency of the processes. The book also gives an account of the techniques used for making the nanostructures.


Craig A. Grimes received B.S. degrees in Electrical Engineering and Physics from the Pennsylvania State University in 1984, and the Ph.D. degree in Electrical and Computer Engineering from the University of Texas at Austin in 1990.  In 1990 he joined the Lockheed Palo Alto Research Laboratory where he worked on artificial dielectric structures.  From 1994 to 2001 Dr. Grimes was a member of the Electrical and Computer Engineering Department at the University of Kentucky, where he was the Frank J. Derbyshire Professor.  He is currently a Professor at the Pennsylvania State University, University Park.  His research interests include solar generation of hydrogen by water photoelectrolysis, remote query chemical and environmental sensors, nano-dimensional metal-oxide thin film architectures, and propagation and control of electromagnetic energy.  He has contributed over 150 archival journal publications, eight book chapters, and over fifteen patents.  He is Editor-in-Chief of Sensor Letters, co-author of the book The Electromagnetic Origin of Quantum Theory and Light published by World Scientific (2nd Edition, 2005), and Editor of The Encyclopedia of Sensors to be published by American Scientific Publishing in 2005.