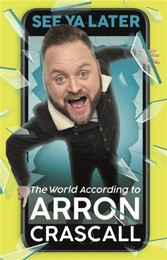 See Ya Later - The World According to Arron Crascall

See Ya Later - The World According to Arron Crascall

Alright guys? It's me, Arron. Or as some people call me, 'that guy with the phone, the skinny jeans and the really fat head'.In a world that seems to be freefalling without a parachute towards utter chaos, I'm here to remind you that when life gives you lemons, make lemonade. No, in fact, when life gives you lemons, make a fool out of yourself in the lemonade aisle.*Because there's more to life than Brexit, Bake Off and banging on about being vegan. Yes, with this book - which is my take on the world - you will learn how to survive a proper lads' holiday, become a master in the art of takeaway ordering and find out about the pitfalls of seriously inappropriate tattoos.So do yourself a favour: turn off the news, cancel that juice cleanse, open your eyes to the brilliant, hilarious world we live in and most importantly . . . buy this book.SEE YA LATER! Arron x*Actually, don't do exactly that, that's my thing.