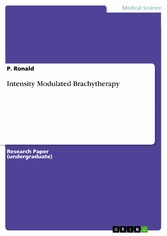 Research Paper (undergraduate) from the year 2011 in the subject Medicine - Radiology, Nuclear Medicine, grade: 4.7, University of Michigan, language: English, abstract: Radiation, the emission of rays of high frequency and wavelengths, has been in use for more than 100 years. It has been used in the field of medicine since the early 1900s when scientists like Marie Curie, who was awarded the Nobel Prize in Science for her cutting edge work in the field of radioactivity, discovered elements with radioactive properties such as radium and polonium. Since then, several new innovations have been made in the use of radiation in medicine. Radiation is majorly used in the treatment of cancers and malignant cells. And simply, radiotherapy can be defined as the use of ionizing radiation in the control and eradication of malignant cancer cells. It is to be differentiated from radiology which refers to the application of ionizing radiation in the diagnosis of diseases. Radiology makes use of radiation in the imaging of the human body. There are two types of radiation, ionizing and non-ionizing radiation. Ionizing radiation has more applications in the field of radiotherapy than non-ionizing radiation. There are machines that can carefully measure doses of ionizing radiation and then direct the beams at the area of the body in which the cancerous cells are situated. These machines focus the high energy beams on the cells so as to either incapacitate them or totally destroy them. In most cases, these high energy beams damages certain parts of the cells, especially the DNA in the nucleus, thereby making these cells unable to divide and replicate. Unlike normal cells which can recover and repair themselves when damaged by radiation, cancerous cells cannot. And so they die.