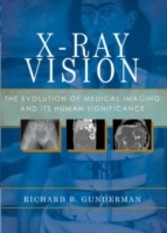 The discovery of the x-ray in 1895 proved to be one of the most transformative breakthroughs in the history of science. It ushered in a new era in medicine, allowing physicians and patients to peer inside the living human body, without the use of a scalpel, to assess health and diagnose diseases. The x-ray opened up the world of the very small, allowing us to determine the structure of the molecules of which we are made. It also revealed the true nature of the largest and oldest objects in the universe, including the universe itself. Today it has spawned amazing new imaging techniques, including ultrasound, CT scanning, MR imaging, and nuclear medicine, which have opened up remarkable new windows on the structure and function of the human body. This book recounts the stories of the remarkable physicians and scientists who developed these new imaging technologies. It tells the stories of real patients whose lives have been touched, transformed, and in many cases saved by medical imaging. And it shines new light on the surprising ways x-rays have transformed our view of ourselves and the world we inhabit. Richly illustrated with both historical images and imaging studies of real patients, X-ray Vision is a feast for the eyes as well as the mind.