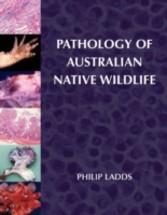 Pathology of Australian Native Wildlife brings together in one volume available information on the pathology of Australian native vertebrate wildlife, excluding fish. It provides rapid access to documented information on diseases in Australian wildlife, domiciled either in Australia or overseas. The book comprises 45 chapters, each detailing pathological changes caused by specific pathogens including viruses, bacteria, fungi, protozoa, helminths and ectoparasites, and other injurious agents and conditions such as toxins and neoplasia affecting terrestrial and marine mammals, birds, reptiles and amphibians. Although the aim is to describe morphological (gross and microscopic) changes, the author also indicates history and clinical signs, thus providing guidance as to which lesions should be specifically searched for, and what ancillary testing might be needed to confirm a diagnosis. Illustrated throughout with colour photographs, this will be the essential reference for veterinary pathologists and clinicians, as well as wildlife researchers, zoos, wildlife parks, environmentalists, conservationists and students. Pathology of Australian Native Wildlife was awarded a 2010 Whitley Certificate of Commendation for Zoological Resource.